Click the titles below to explore the inside of the church:

The south-facing porch is situated towards the highest point of the churchyard. A plain stone step with a semi-circular inset projects to welcome you. As you enter, look for the masons’ marks inscribed into the stonework of the entrance arch and on the inner archway.

The entrance porch is small, almost domestic, unlike many churches of this era. The warm Herefordshire sandstone contrasts with the white plastered and lime-washed rubble walls. The ceiling is lime-washed plaster on a concrete vault.

Above the inner doorway 1 are six doves of peace and a cross and stars, carved in contrasting local stone. At first glance the doves appear identical, but they are all strikingly different.

The double entrance doors are made of wide planks of English oak, studded with hand-made iron nails, and with beautiful plaited wrought iron hinges.

As you enter through the doorway notice how thick the walls appear; they are almost 150mm thicker than the rest of the building. This is an architectural trick to make the building seem more massive. 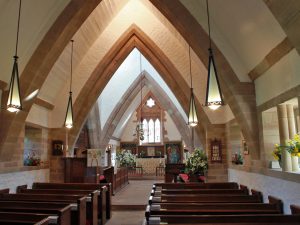 As you enter the Nave pause to admire the vaulted ceiling and steep pointed arches.

The roof is unreinforced concrete and you can still see the impression of the timber planks, and in many cases the actual grain and saw cuts, used during the construction. Although the use of concrete was still relatively unusual at the time, there are earlier examples, such as at Salisbury Cathedral.

To the left of the doorway is the substantial stone font 2. It is intricately decorated with interwoven friezes of grapevines and was a gift from members of the Foster family in memory of their grandparents. In the outer wall below the font is a stone grille, part of the original heating system.

At the back of the church, on the left hand side, is a cabinet displaying a beautifully embroidered altar frontal 3. This was donated anonymously in 1960, in tribute to the wild flowers carved on the choir stalls and in thanks for “the leaving of this chuch open for visitors”. The same person also donated the embroidered seat covers and hymn book covers. Many of the flowers can be seen in the churchyard today.

In the adjoining cabinet 4 is a triptych. The painted wings are Flemish and date from the 16th century, while the central carved panels are thought to be a little later. The main central panel shows the crucifixion, with St John the Baptist on the panel above. The other panels include Christ in the temple, before Herod, and being scourged. Next to the triptych is the ceremonial mallet used by Alice Foster when the church’s foundation stone was laid, and the order of service used at the consecration of the church.

Between the two display cabinets is an attractively carved alms box in memory of Cedric Foster, who died at the battle of Neuve Chapelle in 1915.

Above the cabinets, the double-light west window 5 is in memory of Alice Foster’s sister, Julia. It is simple and straight headed with an internal arch. The stained glass shows incidents in the life of St Cecilia (Patron Saint of Music) and St Margaret of Scotland. The cherub choir is lulling St Cecilia to sleep with a cat and kittens at her feet.

The oak pulpit 6 is supported on a stone plinth and has one carved panel of Christ preaching to countryfolk whilst their children continue playing. Next to the pulpit is an early 19th century Russian icon depicting the life of John the Baptist. It is painted on a prepared wooden panel in enamel colours and gilt, with detail in pen. 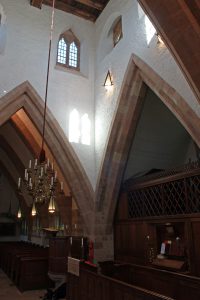 The transition from nave to chancel is dramatic, with eight clerestory windows of different patterns of stonework and tracery. At dawn, as first light enters and later in the day, there are some splendid lighting effects both here and in the nave and sanctuary. Together with the lime-washed walls, the effect is of illuminating the whole church and there is a striking contrast with the dark oak-beamed roof structure above.

The north transept houses the organ 7, which was built in 1903 by J W Walker and Sons Limited. The action and pipework is placed behind oak panels and a simple latticework, which gives a good resonant sound. The organ cost £512 to build. It was restored by the same firm in 2000 at a cost of over £58,000. Behind the organ is a spiral staircase leading to the tower roof.

Above the organ is the north window; an exceptional example of tracery. The design is thought to have originated from a diagram for the twelve heavenly houses to be found in Lethaby’s book “Architecture, Mysticism and Myth”.

The oak choir and clergy stalls 8 are delicately carved with forty eight panels depicting wild flowers. The carving is almost certainly the work of George Jack, teacher of woodcarving at the Royal College of Arts.

The south window 9 is a fine example of the work of the Christopher Whall studios. His work is particularly known for its richness colour and clarity of design. The window depicts an angel and three musicians with a memorial inscription to Ebenezer Jordan. 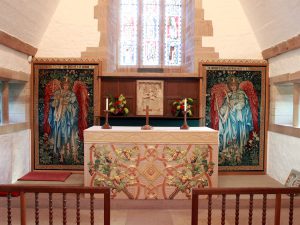 The stone slabbed floor extends through to the sanctuary 10 and the scale of the building becomes almost domestic again, similar to the porch. The north and south windows are simple in form, with a little more detail than those in the nave. There is a piscina A piscina is a shallow basin placed near the altar of a church used for washing the communion vessels. cut into the south window sill.

To either side of the altar are tapestries 11 made by the William Morris Workshops from designs by Edward Burne-Jones. The original design was produced in 1875 for a stained glass window in Salisbury Cathedral. The intricate details of these “Angeli Laudantes” were woven for Ebenezer Jordan in memory of his parents.

Behind the altar, set into the oak panelling, is a fine alabaster statue of the Madonna.

Above the altar, the east window 12 is the finest in the church. It consists of three lancets, surmounted by a six-pointed star, thought to be either the Star of Bethlehem or of David. Appropriately for a church dedicated to All Saints, there are seven saints and two angels within the lancets, with a wavy band in the stonework above, possibly indicating the sea of heaven beneath the stars.

There are two wall plaques on the north wall commemorating Arthur and Alice Foster. Next to the plaques is a door leading down to the vestry. 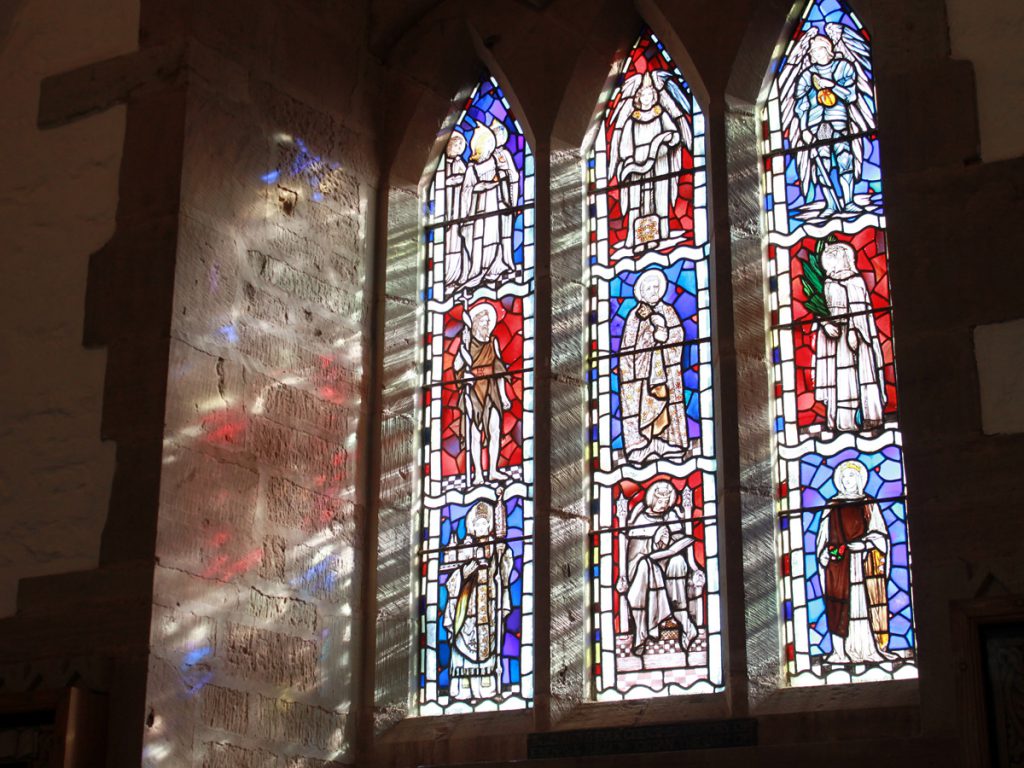 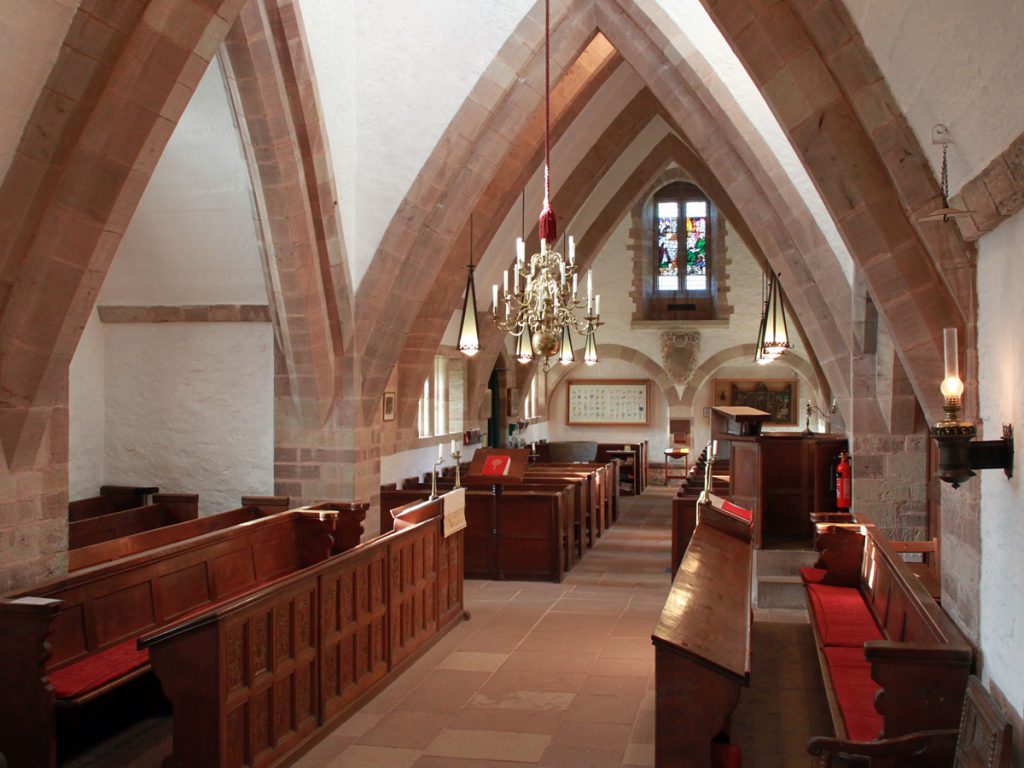 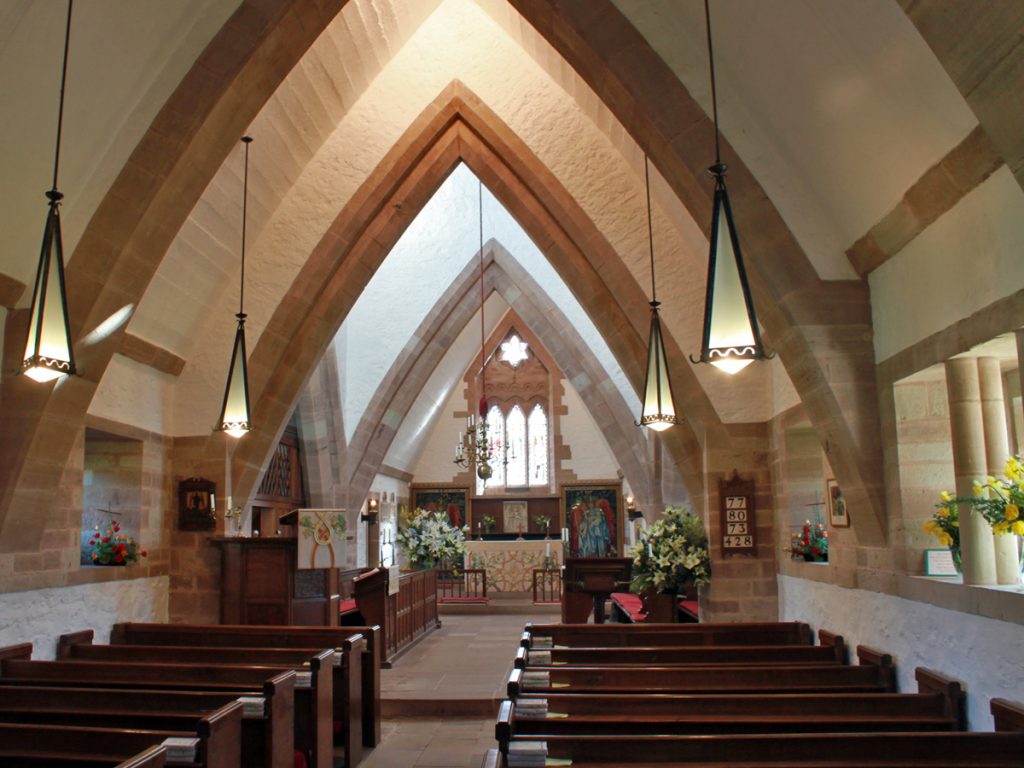